The History of Labor Day 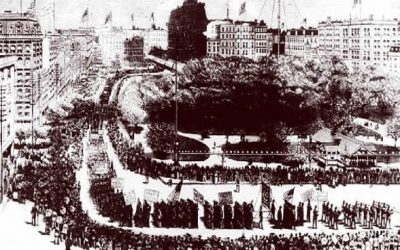 Observed the first Monday in September, Labor Day became a national holiday on June 28, 1894, when President Grover Cleveland signed a law that recognizes the many contributions workers have made to America’s strength, prosperity, and well-being. Before it was a federal holiday, Labor Day was recognized by individual states starting in the 1880s.

Who first proposed the holiday is not entirely clear. Some records show that in 1882, Peter J. McGuire, general secretary of the Brotherhood of Carpenters and Joiners and a co-founder of the American Federation of Labor, suggested setting aside a day for a “general holiday for the laboring classes” to honor those “who from rude nature have delved and carved all the grandeur we behold.”

However, recent research supports that it was Matthew Maguire who proposed the holiday in 1882 while serving as secretary of the Central Labor Union in New York.

Both Maguire and McGuire attended the country’s first Labor Day parade in New York City that same year. Still celebrated today with parades, picnics and parties, the festivities remain very similar to those outlined in the first proposal for the holiday.

American labor raised the nation’s standard of living and brought us closer to the realization of our ideals. It is appropriate, therefore, that the nation pays tribute on Labor Day to those who contribute so much to the nation’s strength, freedom, and leadership – the American worker.

We invite you to take a moment and remember all those who have contributed to our nation’s strength, prosperity and well-being as we go into celebrating this year’s 2022 Labor Day.