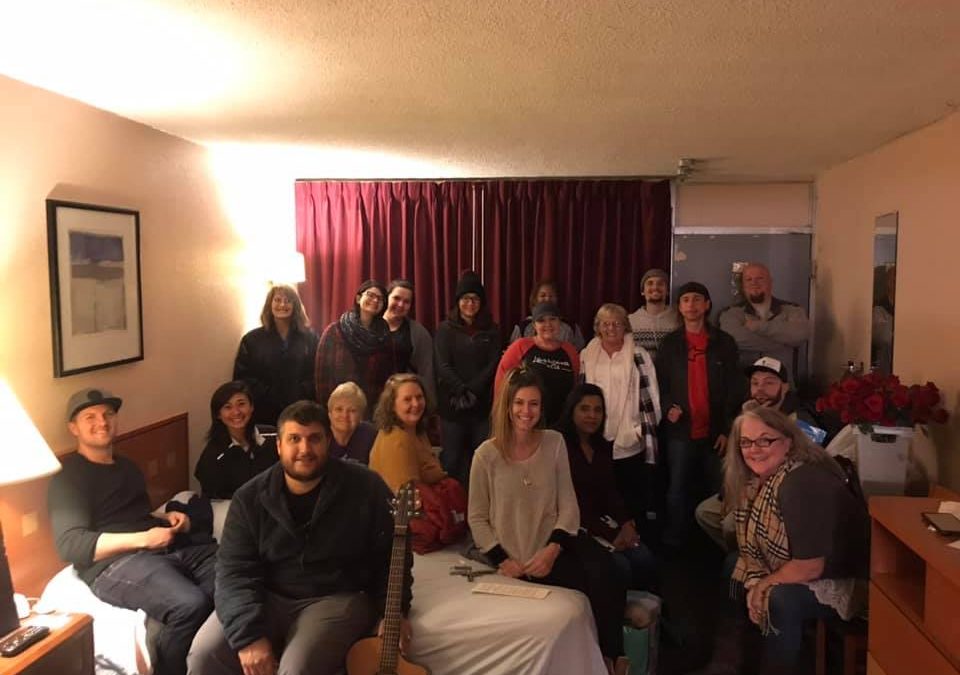 This past weekend, our Redeem ministry team rented out a local motel room and had constant prayer, worship, and outreach. Friday January 24th started out like any other day. Jessica Cronin along with a few volunteers ran around taking care of last minute items to prepare for the weekend. The team met up at the hotel and began their weekend with worship and prayer. Even from the first note, the atmosphere began to shift. Music filled the air, and guests staying in the motel were drawn to Jesus. In the first night alone, the Redeem team were able to help a woman and her two children get off the streets, and see 4 people give their lives to Christ.

The next day, the team split up into groups of two to three people and walked around the area. Their heart in going out was to minister and share the love of Jesus. In route, Jonathan Cronin and a friend of his met a man named Kevin and his wife Alana. Kevin had been bound to a wheelchair all his life. This inspired the guys to pray for him, believing that Jesus would heal his legs and that he would be able to stand up and leave his wheelchair.

Laying their hands on the man’s shoulders, Jonathan and his friend began to pray. As they did, the power of Jesus showed up in great measure. The man began to feel strength in his legs. Encouraged, the man tried to stand up. He did!!! He even began to walk forward!!! His wife wanted to cry but she was too elated to do so! She said, “That is God! God is walking with you, Boo”.

Jonathan proceeded to ask Kevin, “How do you feel?” He said, “I feel good. I feel good. I thank God.” The team celebrated with Kevin and Alana a little longer, then returned to the motel room once more for more worship and outreach.

Through the course of the 24 hours that the Redeem team ministered in and around the motel, 30 people gave their lives to Christ. In the last worship set of the night, a woman spoke up and shared, “I have been out 3 or 4 times today, and no one is doing what they regularly do. No one is out day drinking. The atmosphere is just really quiet and peaceful”. She along with several other people were really encouraged by our team’s presence. They said, “We needed you to come here”. Our team is following up with those we met this weekend and look forward to continually ministering in their area.

I learned about Take The City through a young lady at our church about 5 years ago and after going on my first outreach, I was HOOKED. I fell in love with the family environment, organic evangelism, and genuine love that I experience here.  The training, connections, and opportunities that I’ve been blessed with here have been nothing short of life-changing!  God bless my TTC family.